HKC has long recognized that maintaining the character and historic integrity of the Plaza is essential to preserving Kansas City’s heritage and economic success. HKC was a leader in the City’s update of the Midtown/Plaza Area Plan, which culminated in a zoning ordinance that limits height and land use in the historic core of the Plaza and an updated Plan that provides the framework for protecting the Plaza area and Midtown.

The Plaza Bowl Overlay District Ordinance limits building heights and land uses on both sides of 47th St. from Roanoke Pkwy. on the west to Main St. on the east. Building heights are limited to 45’ to 190’ depending on location. Uses are more limited than otherwise would be permitted by the underlying zoning.

The ordinance permits “deviations” to these height and use limits if approved by the City Council. However, the ordinance includes no standards or limits for evaluating and approving requested deviations. Without standards or limits, developers can request height deviations in excess of the Overlay District maximums, including additional floors. It gives nearly unlimited discretion to the City Council. The greatest incentive for using deviations is the addition of income-generating floors to produce more income for the developer’s bottom line. The ordinance simply needs to be tweaked to provide objective standards for deviations to avoid abuse.

Working with City Councilwoman Shields and Bough, HKC drafted Ordinance No. 220729, which proposes to define deviation standards in the Plaza Bowl Overlay District. The ordianance will be heard by the City Plan Commission on Tuesday, September 20th, and the following week by the Neighborhood Planning and Development Committee. 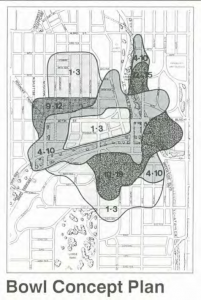 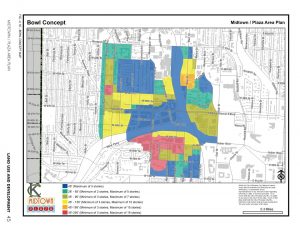 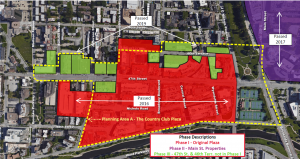 Following a two year process involving dozens of property owners, city ofﬁcials, developers and citizens, the Council approved the third expansion of the Plaza Bowl Overlay District, championed by Councilwoman Shields and led by HKC. As a city ordinance, it codiﬁes existing recommendations, adding more “teeth” to height and use regulations for the heart of our iconic Country Club Plaza.

The goal of the Overlay is to preserve the character and integrity of the Plaza, maintain the Plaza Bowl concept, and protect the property values and expectations of Plaza property owners, residents, and visitors. The overlay district is a major “win” for preservation in Kansas City.

How did we get here? Adoption of the overlay was a top priority of the Midtown Plaza Area Plan, resulting from 3 years of community engagement, of which HKC was a major player. Adoption of the overlay district enables future developers and current owners to reasonably rely upon and predict what heights and uses will be allowed for future buildings.
HKC’s position: Would it not be better for everyone if we have a clear development policy that no longer necessitates neighborhoods bringing 500 people down to city hall to fight development that is inconsistent with the Plan. An overlay district will defuse sometimes contentious and protracted processes that take away from a coherent and orderly development of the concentric rings around the base of the Country Club Plaza.

Current property owners already have substantial investments in the Plaza area. 50% of the impacted developers/landowners, Taubman (owners of the Plaza), area neighborhoods and stakeholders support this overlay. No one is averse to development. We want reasonable development consistent with City adopted policy, the Midtown Plaza Area Plan.